In a move that was inevitable, the Saitama Seibu Lions released P Wade LeBlanc earlier this week. This was confirmed when he was reunited with his wife and children in Louisiana, as posted on Instagram by Natalie LeBlanc.

For his farewell, LeBlanc posted a photo from the training camp in Miyazaki showing himself and the other foreign players getting a personalized sake. He had the following statement and photo: 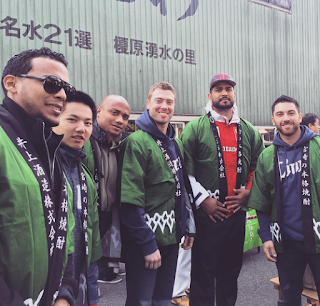 "There aren't too many jobs where the people you work with become family....I'm gonna miss my new brothers." -Wade LeBlanc.

He last appeared with the Lions ni-gun team on June 14 and has spent the last few months recovering from an elbow injury. In eight starts with the ichi-gun team, he posted a 2-5 record to go with a 4.23 ERA and 4.62 FIP. He won his NPB debut on April 2 where he went six innings against the Rakuten Golden Eagles and one unearned run allowed due to error.

His highlight with the Lions ichi-gun was on April 15 where he had a complete game against the Eagles receiving plenty of run support. LeBlanc also had a quality start against the Hokkaido Nippon-Ham Fighters where he went 7.2 innings and allowed a late hit to lose against Shohei Otani. His last start was on May 21 in a loss to Chiba.

The Lions dumped all their foreign players from 2014 with the exception of Ernesto Mejia hoping to find fresh blood. LeBlanc made $1 million with the Lions after being a fringe player between the minors and majors during his MLB career. He was originally in the San Diego Padres rotation before bouncing around with the Miami Marlins, Houston Astros and Los Angeles Angels of Anaheim as well as one game with the New York Yankees.

This signing proved to be stop gap bridge to pave way for Kona Takahashi and Yusei Kikuchi, who both started the season with the ni-gun. He was also in the rotation in place of Takayuki Kishi as the Lions' ace was out for the first two months of the season with an injury. We were hoping LeBlanc would be a serviceable fifth or sixth starter, but it wasn't the case.

The problem with LeBlanc was how he didn't have a pitch to strikeout hitters. He would have a slow curve ball which batters could easily foul off and put the ball in play. Like many Lions pitchers, it was all about asking the defense to win games and LeBlanc was no different. This experiment failed and didn't work out to produce results minus two games against Rakuten.

Despite all the problems he brought to the rotation, we're thankful LeBlanc got to do something we here at Graveyard Baseball have never done, which is visit Japan. We've learned he's a great guy off the field and wish him nothing but the best. Good luck Wade in your future endeavors.