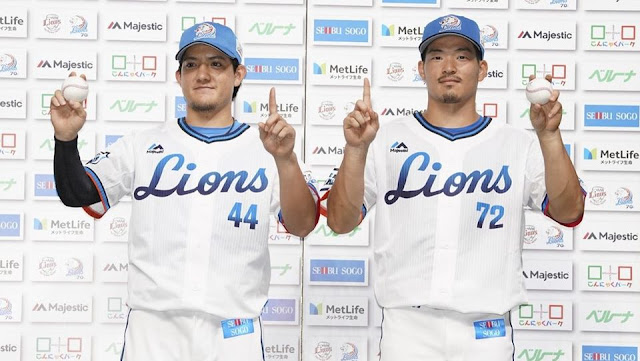 The Saitama Seibu Lions went 4-2 in their first homestand with fans allowed against the Chiba Lotte Marines. By taking the series, they moved into A-class and sit one game behind the first place Softbank Hawks and 1/2 a game behind the Rakuten Eagles. How did it all happen? Here's our recap.

Imai dug an early 3-1 hole when Yudai Fujioka had two timely hits. However, the Lions answered in the with key hits from Takumi Kuriyama and Cory Spangenberg for a 4-3 lead. They pulled away in the next inning when Spangenberg was clutch again and Shohei Suzuki had a key extra base as Mima was left in to dry. Imai earned his second win of the season as a result with the final score being 8-3.

Takahashi allowed several hits and was fortunate to not give up more. What proved to be critical was a solo HR in the 6th from Seiya Inoue. The Lions had a chance in the 7th, but only scored one run off Ojima with a non-hit RBI and the Marines bullpen held firm. They also had two on base in the 8th inning, only for Kuriyama to strikeout in a 2-1 loss.

Yoza allowed only two runs off timely hits by Hisanori Yasuda and Shogo Nakamura in the first inning. Sosuke Genda got a run back on a timely hit from the bottom of the frame.

In the second inning, another chance came for the Lions with the tying run in scoring position. Seiji Kawagoe hit his first career HR for a two runs and gave the Lions the lead. The scored remained 3-2 for the rest of the game as Yoza fought through five innings and had some perfect defense behind him, but he also helped his own cause with a liner right in his face being caught.

Katsunori Hirai, Kaima Taira, Reed Garrett and Tatsushi Masuda had no trouble taking an inning each and Yoza earned his first career win.

The Lions were depending on Neal to hold a 2-0 lead when Hotaka Yamakawa hit a two-run HR in the first inning. Neal gave up a run in the fourth and sixth innings, with the latter coming off a timely hit from Inoue. He went six innings, but earned a no decision, keeping the game tied and an opportunity for the Lions. With Naoya Masuda in the game, he gave up a leadoff bunt single to Genda, which was followed by a bunt and intentional walk. Shuta Tonosaki came through on a timely sayonara to end it with an identical 3-2 score from the previous game.

Atsuki Taneichi was unstoppable and Keisuke Honda did the best he could through 6+ innings. Both sides didn't allow a run until the 7th, where a timely hit came through Tsuyoshi Sugano. Even though it was 1-0, the Lions offense was dead without Kuriyama or Takeya Nakamura in the lineup while Taneichi took advantage of a base running blunder by Shohei Suzuki. Taneichi finished the game on his own while striking out Cory Spangenberg stranding runners in the process.

Both starters were able to last five innings, but no one beyond that. The Lions struck first on an RBI double from Kuriyama, the 350th of his career. Enokida gave up two runs with timely hits from Inoue and Brandon Laird.

The Lions answered in the 6th when Fumiya Ono started pitching for the Marines. With Tonosaki reaching base, Takeya Nakamura hit the gap to tie it and Kuriyama had another double for the go-ahead run. Even Fumikazu Kimura added an extra run when finding a timely hit. The bullpen of Hirai, Taira, Garrett and Masuda did their jobs again cleaning out the Marine bats for a 4-2 win.

This was a solid series with even both losses being winnable. The only odd thing? It's clear the offense can be better. Tomoya Mori specifically has been a dud on offense and has no reason to bat third in the lineup. Others have shown they can come through, but it is awkward that the veterans Nakamura and Kuriyama are the ones carrying this offense? Yes.

Next week in Fukuoka will be telling, as it's usually a house of horrors, but if anything, this team has shown they can compete. 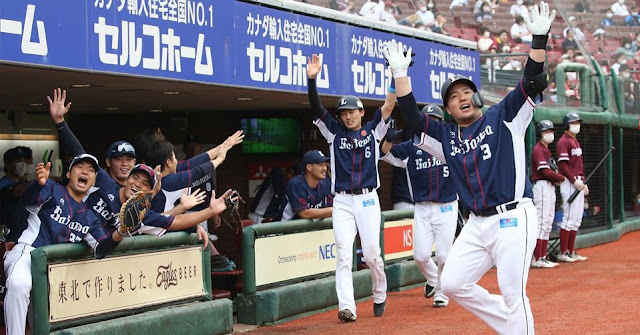 The Saitama Seibu Lions won two out of five games played with one rainout against the Rakuten Eagles. They sit in B-class (4th place) while at a .500 record. Here's how it went down:

The Lions lost this one 11-0 and had no chance from the start. While Imai played with fire initially, it caught up to him in the fourth inning when Daichi Suzuki hit a bases-loaded single and Eigoro Mogi hit a three-run HR to break the ice. Wakui, the former Lion, threw seven scoreless innings.

Kona Takahashi gave up runs with two outs, including a HR to Ryosuke Tatsumi, never getting a chance to win. The Lions stranded several runners on base and had an opportunity when Yuge left in the fourth inning due to injury. Tomohiro Anraku came in and didn't allow a run. The chance came off former Lion Kazuhisa Makita in the 7th inning, where they scored three runs making it 5-4, but that was as close as it got.

The Eagles bullpen stood firm while Katsunori Hirai allowed two runs in the bottom of the 8th to put the game away in a 7-4 defeat.

-Takeya Nakamura hit a double for the 300th of his career.

In what looked like a pitcher's duel on paper, the Lions got to Norimoto early and had no trouble, scoring five runs off the Eagles ace. It was a rally of base hits to make this one a laugher, as three Lions had three-hit games.

Neal earned his first win since Opening Day by pitching six innings and allowing only two runs. The Lions pulled away late in the 9th inning with four runs in a 10-2 victory.  Neal has now won 13 consecutive decisions dating back to last year.

Matsumoto gave up early home runs to Eigoro Mogi and Hiroaki Shimauchi in the first inning, but he didn't allow further damage through five innings. Shiomi looked dominant, but the Lions got to him in the 6th inning when Hotaka Yamakawa tied the game on a three-run home run. Two batters later, Takeya Nakamura hit a solo HR, which was good enough to give the Lions the lead for the rest of the game. Katsunori Hirai, Tetsu Miyagawa, Reed Garrett and Tatsushi Masuda combined for four scoreless innings to even up the series.

Kishi was knocked out early when Yamakawa hit a three-run HR, but the Eagles chipped away at the lead thanks to Hideto Asamura, who had four hits.

With a 5-3 lead in the 7th, Hirai walked the first two batters and that's where the disaster began. The bases were loaded for Kaima Taira and while he struck out Stefen Romero, Asamura tied the game and Yasuhito Uchida hit a grand slam for the Eagles first lead of the day. This ruined a decent 2020 debut for Enokida, who went 6+ innings.

It wasn't an awful week, but overall, this means the Lions went 5-5 in 10 road games when adding the Marines series. The Lions will have a date with Chiba as they return home with fans for the first time on July 21. The good news? Offense had life and didn't look below average like has been this season. 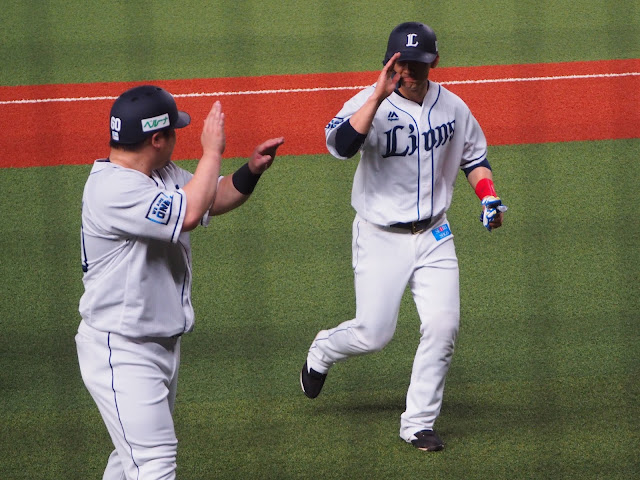 The Saitama Seibu Lions took three out of five games played in Chiba as they sit in third place with a 10-9-1 record in the Pacific League. With a recent vacation I took, here's a short brief on the Orix Buffaloes series prior to the Marines.

The Lions lost the series 2-3-1 including both wins being gifted by the Buffaloes mistakes. In one win, the Lions scored only three runs, which all came on unearned errors. In another game, they were no-hit by Yu Suzuki through five innings and the Orix bullpen didn't allow a hit until the 8th inning.

Masataka Yoshida shredded the Lions pitchers with several key home runs, including a win over the Lions when they had a three-run lead in the late innings. Ryosuke Moriwaki and Ryuya Ogawa couldn't hold in the 8th inning. Bats also remained unclutch as a whole.

Tatsuya Imai threw seven shutout innings in a Lions win, but it was a disappointing series as a whole for starting pitchers which would have been worse if it weren't for a no-game rainout. Kona Takahashi gave up multiple home runs in his outing while Wataru Matsumoto was lit up for five runs in the first two innings.

On Friday, Zach Neal had a miracle comeback of run support to prevent a loss in his record. Takumi Kuriyama hit a two-run HR in the 8th inning while forcing a bases-loaded walk in the 9th for the go-ahead run.

Sunday had Kaito Yoza going 4.2 innings with a lead, but he couldn't record the last out of the 5th to earn a win. The final game had HRs from Kuriyama and Cory Spangenberg into the ZozoMarine Stadium HR Lagoon as the Lions took the series.

This week wasn't all roses for everyone, as Takeya "Okawari-kun" Nakamura is day-to-day after being hit by a pitch from Yoshinobu Yamamoto while his replacements in Nien Ting Wu and Kakeru Yamanobe don't hit as well.

Yuji Kaneko was also taken off the ichi-gun roster after a poor hitting performance while batting ninth. Shohei Suzuki has so far done his part, now batting leadoff in centerfield. We also saw the debut of Junichiro Kishi, an 8th round pick out of Indy ball.

Daisuke Matsuzaka also had back surgery, hoping to make an appearance in 2020, but it will be on hold for at least two months.

The Lions starting pitching had a sketchy two weeks, but the bullpen appears to be a strength with Reed Garrett, Kaima Taira, Katsunori Hirai and Tatsushi Masuda all being important contributors. This should be a good way to start, though the offense still has ups and downs while not being consistent enough.

Best thing? Not faltering into the cellar. In thee first month of the season, no team can afford to dig a hole to climb out of. So far, the Lions haven't done this and are on pace to a similar start from 2019.