Not everyone who goes to Japan tears up the minor leagues before going abroad. Some end up on a crazy journey.

Born and raised in Long Island, New York, Nolin was drafted in the 50th round (2008) out of high school and 48th after his first year in junior college (2009). It wasn't until his second year of JuCo where his stock went up to being a sixth round pick of the Toronto Blue Jays in 2010.

After a few years in the Blue Jays system, he made his MLB debut in 2013 as a starter, but was hit around for six runs allowed in 1.1 innings against the Baltimore Orioles, giving up a three-run HR to J.J. Hardy in the process. It was his only Major League appearance for the year.

Nolin earned his way up again as a September call up for 2014, but only made one mop up appearance in a blowout Blue Jays win.

His career took a change after the 2014 season when he part of a package traded to the Oakland Athletics in a blockbuster trade for Josh Donaldson. Nolin was viewed as a fringe prospect at 24 years old, less upside, but with hopes to contribute sooner than later to thee Oakland A's.

Like the previous season, he spent most of 2015 with the Nashville Sounds in AAA until he became a September call up. He had one win in six starts where that victory happened in Texas against the Rangers. Nolin was later designated for assignment in February 2016.

His journey took on a lot of changes spending stints in minor league organizations of the Milwaukee Brewers, Colorado Rockies, Chicago White Sox, Seattle Mariners and even the independent league Long Island Ducks. He also had Tommy John surgery after being with the Brewers, which sidelined him for 2016 and 2017.

The Lions signed him after the 2019 season with hopes he could be some left-handed starting depth. Even with COVID-19 delaying the 2020 season, he didn't make his ichi-gun NPB debut until past the halfway mark on August 29. He won his first career start with six innings and three earned runs against the Rakuten Eagles. By being the winning pitcher, he earned a Hero Interview. His tape from the debut can be seen here:

Nolin's early success was short lived as he lost two outings and had a no decision in another. His final ichi-gun appearance was on September 26, where he left the game after one inning and aggravated an injury.  The video below shows tape from his quality start and no decision here.

With his inability to stay healthy, the Lions chose to not retain him after the year ended and he is currently a free agent at the time of this writing. He was the only foreign import on the Lions roster from 2020 to not be given a contract for 2021.

While his time with the Long Island Ducks was short in 2019, he was dominant and the team won an Atlantic League championship. Nolin was given a ring for his contributions and didn't open his package until he returned from Japan as shown in this video. All players from the 2019 team had a virtual ring ceremony in 2020 as the season was cancelled due to the COVID-19 pandemic.

This concludes our 2021 update to the A's and Lions series. As Zach Neal and Brian Schlitter are currently playing baseball with both teams, they can still write their story.  Until next time or more players come and go, this series should make more updates as time goes on.

A Minnesota native, Wagner played University baseball at North Dakota State, a school famous for producing NFL quarterback Carson Wentz. He was a 21st round draft pick of the Cleveland Indians in 2005 and stayed in their minor leagues until 2010, where he was traded to the Oakland Athletics for cash considerations.

With Oakland needing depth, Wagner was used as a mop up pitcher for five out of his six games played. He also appeared in the 12th inning of a tied game, where the A's would lose in 16.

Wagner was claimed by the Padres off waivers in 2012, but later went to the Toronto Blue Jays under a minor league deal. With Toronto, he would spend the most amount of MLB time as he played in 36 games for them in 2013 in relief. His 2014 season was cut short due to Tommy John (TJ) surgery and the team released him after the year. He missed the entire 2015 season recovering from TJ.

He became a minor league journeyman from 2016-2017, spending only time in the Tampa Bay Rays and New York Meets AAA affiliates.

The Saitama Seibu Lions signed Wagner in December of 2017, where he was one of two imports picked up in the offseason. They tried to slot him in the 7th and 8th innings as middle relief, but he was mostly inconsistent as was the Lions bullpen for most of the year. He mostly took medium leverage innings.

With bullpen struggles, the Lions added Deunte Heath and Kyle Martin in the middle of the season and the former proved to be a solid closer while the latter helped as setup man. Wagner fell out of favor when Katsunori Hirai and Shogo Noda were the better pitchers.

In September, Wagner was lit up by the Orix Buffaloes in mop up duty and that was all she wrote on his career in Japan. The Lions placed him on waivers before the regular season ended and he hasn't played a game since.

Before he was released, he sold several personal equipment and uniforms on eBay with the Lions permission as it went to charity. I was able to purchase one of the on-field uniforms and it even came with a player card. 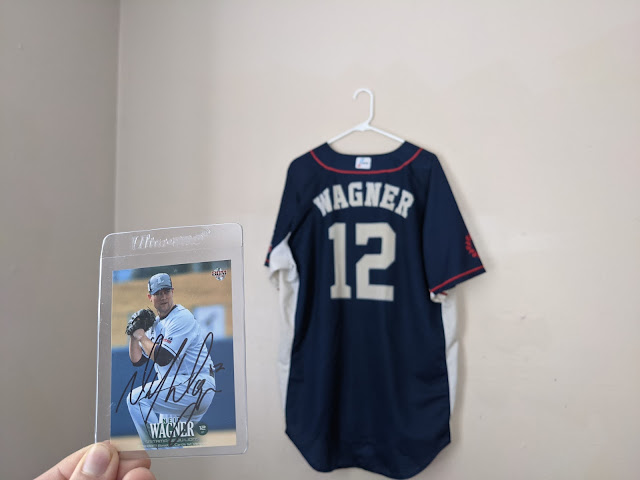 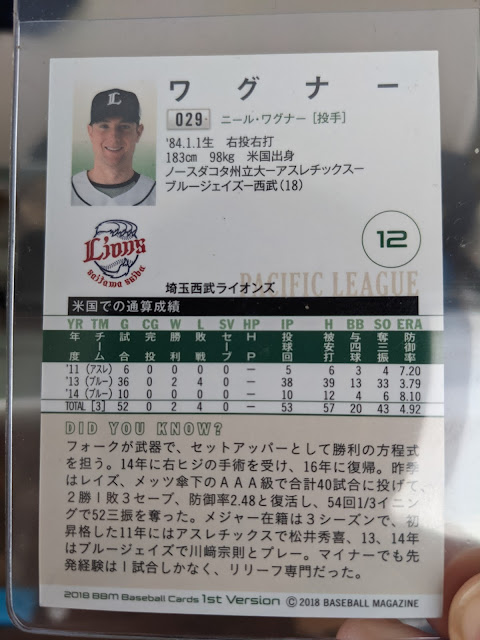 Others in the series:

Posted by Christian Gin at 3:41 PM No comments: 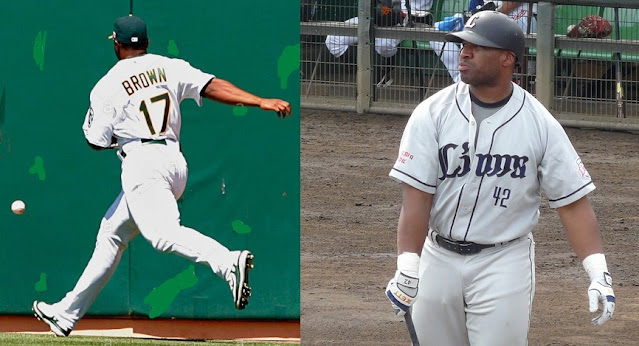 When the 2015 NPB season ended, we wrote a series about people who worked for both the Oakland Athletics and Saitama Seibu Lions. In recent years, the Lions have signed several former A's players while we also overlooked another name who escaped our readings.

With a few names missing, we're doing an update in adding a few more foreigners to this database.  Here is the first of several parts to come ahead, starting with the player we missed who played prior to 2015:

Disclaimer: Zach Neal and Brian Schlitter are still playing baseball with the Lions and A's, respectively. They will not be considered until their tenures are done with their respective teams.

Dermal Bram "Dee" Brown was a two-sport athlete in high school while raised in upstate New York. With his skills in baseball and American football, he was committed to the University of Maryland, who gave the right to play both sports.

He changed plans when the Kansas City Royals drafted him in the first round (14th overall) in the 1996 MLB Draft. It didn't take long to make his MLB debut in 1998 with how he did in the minors as KC rushed him early.

Brown's best season was in 2001, where he played in 106 games, but only hit .245. His last season with Kansas City was 2004 as he was a part time player. Most of his promise was at the AAA level with power hitting, but it couldn't translate once he made it to MLB.

From 2005-2006, he spent time in the minor leagues with the New York Yankees, Washington Nationals and Royals organizations before he signed a minor league deal with the Arizona Diamondbacks in 2007.

Arizona traded him to the Oakland A's for cash considerations and he mostly spent time in AAA with the Sacramento River Cats. In his short time with the A's, he was part a long rotation in the outfield that saw several injuries on the depth chart and became a defensive replacement for eight games.

His 2010 debut on Opening day couldn't have gone better when he hit a go-ahead home run in a 2-1 win. Brown was a DH and outfielder and found some power hitting with 21 home runs. However, most of his success came in interleague play and against the Rakuten Eagles.

His most significant milestone was hitting the 90,000th home run in NPB history, something he accomplished in the first week of the 2010 season. (Chris Marrero hit the 100,000th for the Orix Buffaloes).

Even with the skepticism, his contract was renewed for 2011, but his poor condition came early and the Lions buried him in the Eastern League for most of the year. After being called up a couple times, he couldn't repeat his success from interleague play of 2010 and was placed on waivers in August of that season. It was his last time playing baseball.

Notably, he had a special celebration with teammates Hiroyuki Nakajima and Yasuyuki Kataoka whenever he hit a home run. He was a "Rock Star" as seen here.

Brown's career will be remembered as a long list of what could've been among talents that didn't work out. It's possible the Royals didn't develop him like they hoped, which set a negative trend in his career.

Today, Dee Brown does YouTube videos as a coach for anyone involved with baseball. With plenty of tips and tricks given, he also interviews several players and coaches about the game.

Others in the series:
Mateo "Matty" Alou

Posted by Christian Gin at 9:56 PM No comments: