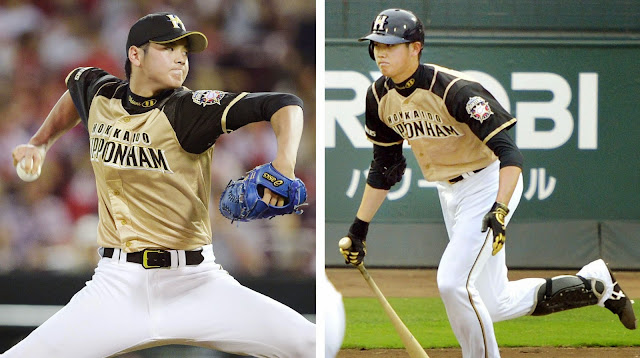 Tonight at 2 a.m. PT will be the series finale between the Seibu Lions and the Nippon-Ham Fighters. And the Lions have their work cut out for them with one of the premier young pitchers in the entire world facing off against them. His name is Shohei Otani, and he will surely be the next Japanese superstar pitcher. Like Hideo Nomo, Hiroki Kuroda, Hisashi Iwakuma, former Lion: Daisuke Matsuzaka, Yu Darvish, and most recently, Masahiro Tanaka, Otani has received loads of hype and fanfare from scouts and media alike.

Out of high school, the belief around Japan was that Otani was going to head straight to MLB, and because of that threat, most NPB clubs were too scared to take a shot on him in the draft. The Fighters on the other hand, decided to take a chance and try to convince him to marinate in Japan for just a little while longer. The Fighters had just been one year removed from seeing their prodigy, Yu Darvish head to the Texas Rangers and once they were able to convince Otani to stay in the Land of the Rising Sun, they gave him Darvish's number 11 and later gave him a 100 million yen contract to keep Otani happy.

The comparisons to Darvish are easy to connect, Otani, like Darvish, stands at 6'4" and has a similar build compared to Darvish. Their pitching styles on the other hand are rather unique, and the biggest difference of them all is that Otani is a much better athlete than Darvish. In fact, Otani is such a great athlete, the Fighters can't resist making him their DH whenever he isn't pitching. He's such a natural hitter with nice and easy power that I guess no coach has found the guts to convince him to just stick to pitching.

Otani is only 20 years old and his stuff is electrifying already at this point in his young career, we'll start by talking about his fastball. His fastball is the fastest the world has seen from a mainland Japanese player, he has been clocked in a regular season game at 161 km/h (101 mph). The GIF seen below shows what that fastball did to a swinging bat in a game last year.

That bat shattered into three pieces, incredible velocity from this young kid. His fastball averaged 155 km/h (96 mph) last season, while we're making comparisons to Yu Darvish, Darvish's fastball has averaged between 92 and 93 mph during his first three years in MLB. We'll talk more about his fastball later on in the report, but the bottom line is, he's going to throw this pitch early and often, sometimes he'll fall in love with his heat too much and as a result makes him less effective but I'm sure that won't be a problem in his start tonight.

Now to talk about one of his secondary pitches, and in my opinion, this is his best secondary pitch and that is his forkball. One thing that you'll notice about each of Otani's four pitches is the variance in velocities. His forkball averages about 144 km/h (89 mph) which is the exact same average speed as Yu Darvish's splitter. Darvish hardly ever throws his splitter while Otani uses his forkball as a fantastic put away pitch that is more reminiscent of Masahiro Tanaka. The gif below shows how Ben Zobrist fared against Otani's forkball in a 2-2 count during last November's All-Star Series.

Absolute filth. When Otani can look to that pitch as a reliable put away, it's usually a long night for the opposition. His next secondary pitch is his slider, and this one is currently right around the caliber of his forkball. It averages 133 km/h (83 mph), and as he matures, it will probably be his bread and butter just like it has been for Yu Darvish in the States (according to fangraphs, Darvish's slider is his highest rated pitch). Otani will throw his slider in the dirt or around the corners which provides solid versatility when coupled with his forkball. The gif below is a slider he threw to the Hanshin Tigers' star import, Matt Murton.

Just beautiful to watch that pitch come out of his hand, looks like a football spiral actually with the way he flicks his wrist. The last pitch in Otani's arsenal is his curveball. And this is where Darvish and Otani really differ in their secondary stuff. On paper, their curveballs seem quite similar and at times, Darvish and Otani seem to come from the same school of thought when it comes to the use of their curveballs. At this point in Otani's career, his curveball is more of a showcase pitch and only has true value in moments of surprise. The fact that Otani hardly ever throws his curveball creates an element of surprise and gives him some moments to throw it. One example was in the All-Star Series against Ben Zobrist, to defeat the possibility of any aggressive first ball hitting, he spun this one in the gif below.

His 112 km/h (70 mph) on that particular curveball matches his average speed on the pitch. Slightly slower than Darvish's average of 73, but as we know, Darvish is very effective changing speeds with his curveball which is exactly why he throws his curveball 10.6% of the time. In my opinion, I don't think Otani will need his curveball to be crazy nasty since he already has three pitches that are already a load to deal with when he's mixing them up.

With all that said, the Lions will need to work counts and try to be patient at the plate with Otani. Otani has had issues at times in his young career with his control, his walk rate in 2013 was 4.8, in 2014 it was 3.3, and early on in 2015 it's currently at 2.4 per 9 innings. If he can continue that sort of pace, there's probably a good chance that he heads to MLB whenever he becomes eligible for the posting system. His strikeout rate in 2014 was 10.4 per 9 innings and to start the year, it's currently at 10.2.

At times, Otani would get into trouble whenever he was taking speed off of his fastball and missing his location up in the zone. This was seen with a 2-0 pitch to Lucas Duda last November, the catcher set up low and away, and he ended up locating the ball belt high and out over the plate, which allowed for Duda to drive to the gap in left-center for a double.

That fastball was clocked at nearly 96 mph, if you can't locate, you're getting hit, just ask Hunter Strickland. One thing to keep an eye on during the game is to see if Otani's fastballs are missing the outside corner against lefties and ending up tailing away. This is usually a sign that his control is off on this given night.

I look for the lefties in the Lions lineup to step up if they are to get the win against the Fighters' phenom. Akiyama and Kuriyama are always the unsung heroes of the Lions offensive production, and tonight they will need to be productive to get the victory. I look for our own young phenom, Tomoya Mori to be the guy who should step up against Otani.

Looking at past results to provide clarity in a game like this, I look at May 2nd's 3-0 win at Rakuten as hope that the Lions can pull it off against Otani. That day the Lions faced Rakuten's ace, Takahiro Norimoto who has a similar skill set in comparison to Otani and that day the Lions scratched out 3 runs despite Norimoto's 12 K's and glided behind the tremendous pitching from Ryoma Nogami.

Let's hope this Graveyard Game is a great one! GANBARRE RAIONZU!