Kenta Maeda: The Film Study; What to Expect From Him In MLB 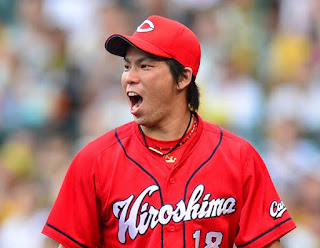 Maeken gets his wish to pitch in the States, but how will he do?

The bombshell that has rocked Japanese baseball finally came about as the Hiroshima Carp posted their ace Kenta Maeda, thus starting the bidding to negotiate with the right hander, who will be 28 in April. Now into December, the winning team will presumably pay the maximum $20 million posting fee to get the services of the man known as "Maeken" in the Land of the Rising Sun.

You know this wouldn't be a good film study without some gifs to wet your whistle so without further ado, let's get right into those.

Unlike my previous study on Shohei Otani which you can read here, Maeken does not blow people away. He lives on the corners and hits his catcher's glove with impressive accuracy. Here's an example with the four seam fastball.

Impeccable control. And this wasn't a random moment, I found many moments like this. The good ole number one isn't overpowering, in fact, the fastball in this gif registers at 93.84 using the km/h-mph converter. His fastball usually sits in the low 90s but it's this accuracy that makes him so impressive. Whether it's right handers or left handers, Maeken makes you pull your hands in to have a chance at hitting his fastball.

There are some examples of Maeda relying on the benefit of the umpire's call, and as many have said before, the strike zone in NPB is notoriously wider than MLB. However, I'll shoot back and say that the the current MLB strike zone is larger than its ever been. So I'm not sure that Maeda's advantages in Japan will be taken away in MLB, I think it's probably closer to a push. Here's a look at his two-seamer.

This pitch right here made the reigning Central League MVP, Tetsuto Yamada (who will be posted in the future), look extra silly. Just another pitch that's added to his repertoire.

I only found three instances of this pitch through all the video I went through. All were of the similar variety, all thrown early in the count to left handers on the opposite side of the plate (right handed batter box, outside corner to lefties). The pitch is for the most part kind of unremarkable and that's probably a reason why Maeda doesn't throw it very often. With Maeken being a real thinking pitcher, he uses this pitch as one to keep hitters honest more than anything. It's probably slightly below average among MLB standards.

Now for his best pitch. I'll let the the gifs say what needs to be said.

Hope you all enjoyed these. Just about all of these were right on the dime of his catcher's glove. And they produce not only swings and misses, but they also produce called strikes. You have to foul this pitch off to have any success against Maeken. It's his best pitch and the way he works the corners, the pitch becomes even more lethal.

This pitch is one that is improving for Maeda, most of Maeda's 2014 footage featured occasional flat curveballs but in 2015, they seemed to have improved. These previous two gifs show a great wipe out pitch against lefties that just looks lethal. Maybe this pitch has a chance to be a difference maker, but he'll have to continue to make it happen. With most of his sliders making right handers look foolish, lefties look foolish on this pitch and it seems he's also got a power version of his curveball seen in the next gif.

For all I know this is a slider, but it comes in at 76 mph which seems slower than his slider which clocks in at a low 80s pace. That pitch looks nasty, it just proves more and more how smart Maeda is as a pitcher.

Other things to consider, Maeda has had seasons of tossing 200 IPs four times in his career. And that's something that's a lot harder to do in Japan where there's almost 20 games less during the seasons compared to MLB, and also because starting pitchers pitch once a week compared to once every five days in the States. That shows real durability and a workhorse who can give you a lot of innings, which is something that's valued quite highly in MLB. He's also a guy who has a great reputation for being a pitcher who fields his position well. Maeken has won 3 NPB Golden Gloves.

Maeda is a guy who doesn't get rocked with the long ball, and that's something that's been a constant his whole entire career. He will get challenged at the big league level, but there's no doubt that he's a workhorse who will hit his spots.

I see him being quite similar to Hisashi Iwakuma because he doesn't have the long ball and command issues of a Kei Igawa, but he's not at the level of a Masahiro Tanaka or Yu Darvish. He's someone who can still be a No. 3 pitcher with an upside of a No. 2.

The Los Angeles Angels of Anaheim, San Diego Padres, St. Louis Cardinals, Houstros Astros, Seattle Mariners, Los Angeles Dodgers and New York Yankees are reportedly interested in Maeken. I think a contract of 5 years, $95 million is a fair one, considering the value that arms are being placed on today's current market, especially when Maeken doesn't require the loss of a draft pick.

EDIT: Maeda has reached an eight year agreement with the Los Angeles Dodgers. It's an estimated $25 million inguaranteed money, which is a low risk bargain for the Dodgers.

One last thing, prepare to be mesmerized by Maeken's stretching routine.