With the winter mostly being a dead time for baseball (outside of free agency and players training), it becomes a slow time for fans just craving the sport. Sure, there is always offseason news, but no games (unless you're watching an independent/foreign league like the ABL in Australia).

This will be a 12-part series, covering every team in NPB with facts, information and a possible guide for those looking for a team. Primarily, this is intended for MLB fans in North America wanting to know more about NPB, but those in Japan or if you're already an expert, it should be an easy refresher.

Before mentioning the team itself in this first post, here are some things we'll look at:

Ownership: Every NPB team has a corporate owner and each company is known for something. One team still has a family ownership co-owned with a company.

League: There are only two leagues in NPB with the Central and Pacific. The Central is similar to the National League where the pitcher must bat while the Pacific is like the American League featuring a designated hitter.

Payroll rank: Because people are curious who can spend money and who can't.  Remember, there are 12 teams.

Location/Stadium: Each team has its own region or city represented in an area of Japan. Some teams have a nicer stadium than others, while a few represent more square miles (or kilometers) than others.

Uniforms: Photos will be projected from their 2016, unless there are no changes from 2015.

Mascots: Every team markets mascots like crazy. There's even prefecture mascots which are at games, but we'll focus on the team ones with a photo.

Cheer song: Seventh inning stretch in MLB is usually a singing of "Take me out to the ballgame" and sometimes adding "God Bless America", but in Japan, they sing their cheer song or "fight song" during this break. Most of the teams feature balloons. If the team is on the road, the visiting crowd will hear their cheer song at the end of the sixth inning.

Ōendan Songs: Thanks to the internet, people film or record the songs fans will sing while their team is batting. Players have their own songs being sung when at the plate, but there are also "chance" songs when there is a chance (aka guys on base). They also have scoring and victory songs.  An Ōendan roughly translates into cheer section. Like college football, there are visitor's sections which allow fans who root for the road team to be together and sing the songs.

MLB Comparison: This is an estimated equivalent of what the NPB team could be viewed as for an MLB fan. Nothing can be exact, but based on history, coaching philosophy and fundamentals, I will compare to the best that I can.

Notable former MiLB and MLB players: This will show players who came to their NPB team on the ichi-gun and made a career from North America. My listing will be incomplete, but a handful of names will be shown. There will be some overlapping with Japanese players who have come back from MLB to NPB.

Notable players who played in MLB: These are players who came from their NPB team to MLB and at least played a game in the big leagues. (Hiroyuki Nakajima will not be listed due to being only in the minors). Legendary players like Sadaharu Oh will also not be written, because the average MLB fan will not know who that is.

Verdict: We give reasons why to like and dislike the given team. There will always be pros and cons.

The Yomiuri Giants are better known as the Kyojin (巨人) which is the direct way of saying "Giants" in Japanese. They were originally founded  in 1934 as "The Great Japan Tokyo Baseball Club" and were the first professional baseball team in the country. Amateur baseball at the high school and university level began 20 years before a professional team existed.

Yomiuri is the largest media conglomerate of Japan. It's the equivalent of what the USA would consider the New York Times. As a result, they have power and the media controls them. The Yomiuri Shimbun is the paper well-known in Tokyo and essentially, the power the Giants have on the country due to the media owning them (not the other way around) cannot be overstated.

With Yomiuri owning the Giants, they have an elitist feel to them where nothing can be said negatively about the team (at least not by Yomiuri themselves). An example is how they hire managers from within as no one (except the first in team history) has managed the Giants unless they played their entire career with them. While recently three players were banned from baseball after being caught for gambling, it was most likely reported by someone else, meaning the Kyojin couldn't sweep this story under a rug or ignore it.

The Kyojin had the second highest payroll last season, but traditionally they're the top spending team. Typically, they can throw money around at players if they want to. It would not be surprising if this ranking drops for 2016 with several veterans taking a significant paycut due to a poor season last year. 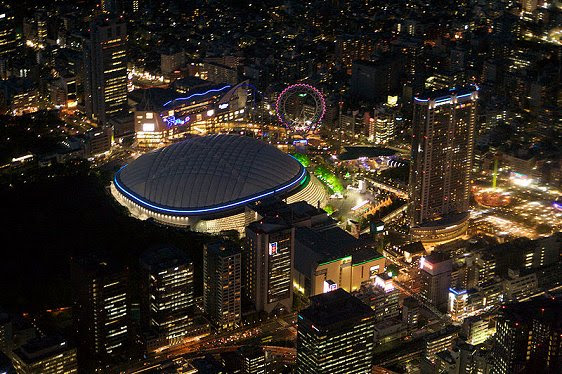 Tokyo Dome is in the heart of Tokyo in Bunkyo Ward. Sometimes it's called "The Big Egg" for it's white roof on top, but it's been their home since 1988. This stadium has hosted several events, including multiple Major League baseball games which have counted towards the regular season. 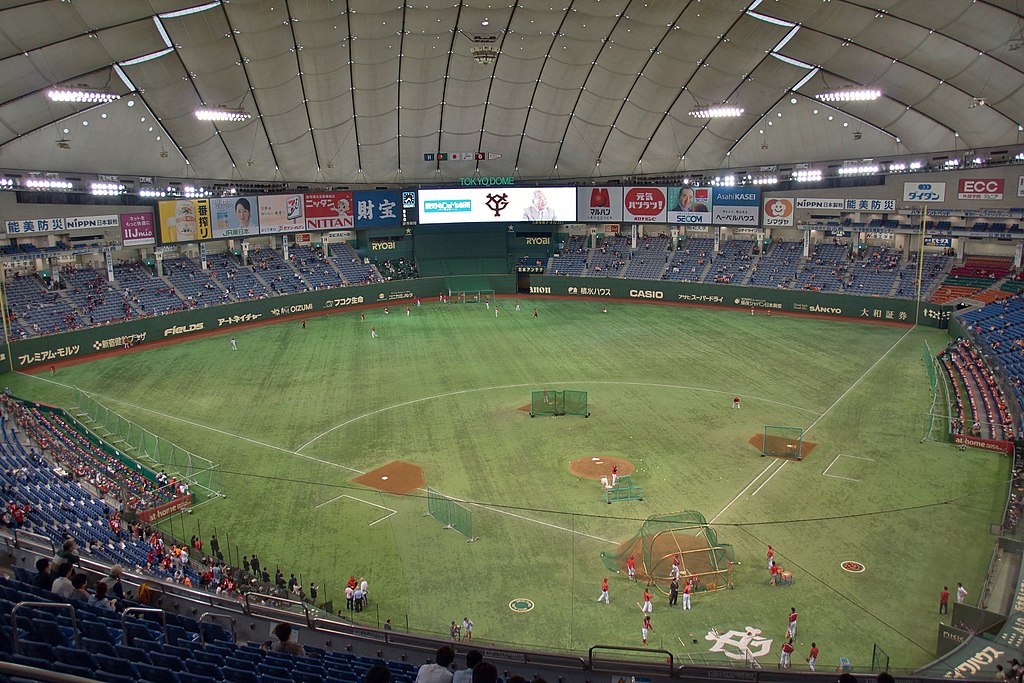 The park is prone to home runs being indoors, but the dimensions can at least fit MLB standards to host some games. It's arguably a more corporate crowd compared to the rest due to the high priced tickets. Tokyo Dome is also home to the Japanese Baseball Hall of Fame.

Primary Uniforms: Currently made by Under Armour 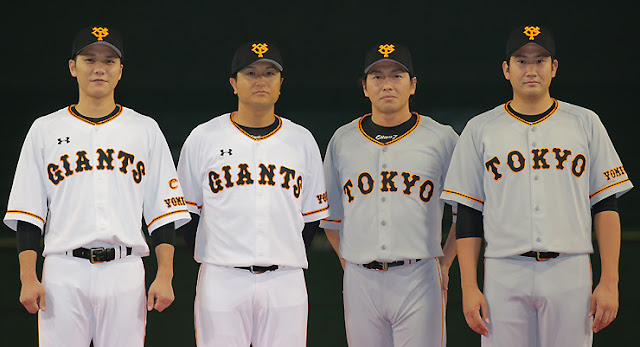 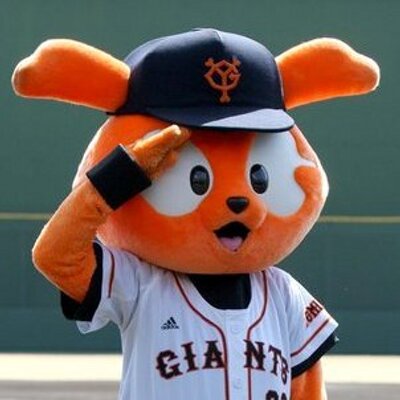 (Note: Tokyo Dome is one of two stadiums in Japan that doesn't allow balloons when Lucky 7 happens. So essentially this song plays and fans will hold up scarves/towels instead.

The Kyojin are not like the San Francisco Giants despite the uniform resemblance (which was inspired in connection to well-known New York Giants LF Lefty O'Doul). They are Japan's team, as they have won 22 Japan Series championships at 36 Central League Pennants (which in Japan is regular season championships).

Because they're the team of Japan and well-known throughout the country, they're either loved or hated by baseball fans. Essentially, all 11 over teams will not like the Kyojin with their power over the media and elitist background. There aren't many rivalries in Japan except one as the Giants see the Hanshin Tigers as the main rival. Everyone else views the Giants as a rival, even though the Pacific League does not see them much.

Notable Giants who played in MLB:

Because you want to win and have a contending team every year. The Kyojin rarely miss the postseason and get plenty of coverage. Even for Americans, they can see them through ONE World Sports. Access will be easy because the Giants control everything media-wise.


Why you don't root for them:

Because they're the "Yankees of Japan". Tokyo is the largest market in the country and they'll always get coverage. Some teams have fans that travel for road games, but the Giants are such a national team over Japan that they are everywhere.

Due to their national recognition, they get the inside track on acquiring players via the draft. There's been history of them bullying other teams to make sure they get their way in the first round.


The other problem with the Giants is how the Central League hasn't taken the next step in promoting their brand of NPB baseball. The Pacific League has made a service known as @PacificLeagueTV to watch games. However, chairman Tsuneo Watanabe is responsible for less coverage internationally because he sees baseball being "traditional" with no need for changes. The Giants (and Central League) are basically waiting for him to croak in order for a more progressive approach to come.

Other Teams in Series: