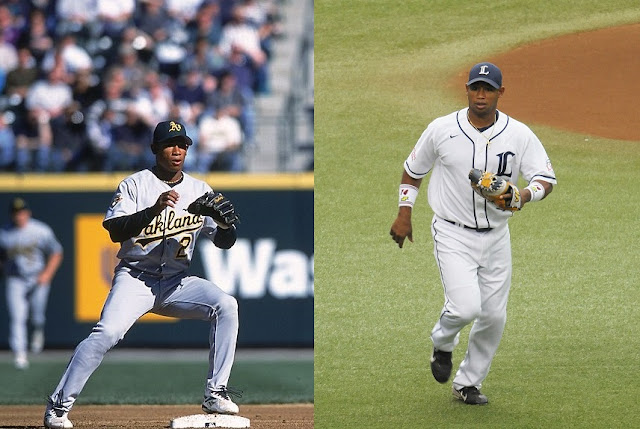 Our next man up in this series is another former prospect who just never really put it together in the big leagues. He finally found a spot in Japan and bits of success with three different Pacific League clubs in the Land of the Rising Sun.


As has been an early theme with these posts, we once again see a player who grew up in the Oakland A's organization, after being signed out of the Dominican Republic at the age of 17. Ortiz came with a lot of promise during ascent up the minor league ladder, but once he made the big leagues, things all went wrong.

Around the turn of the century, Jose Ortiz was the talk of all A's prospects. It started with a sparkling start in the California League as he hit 16 home runs and swiped 22 bags all at the age of 20. He then went up to AA Huntsville where it seems as though the organization asked him sacrifice patience for power as his home run total went down to 6, but his OBP shot up from .332 in Modesto to .369 in Huntsville.

He'd then spend two seasons in AAA, before finally appearing to figure everything by having a 20-20 season for the River Cats in 2000 at the age of 23. That earned him his first call-up to Oakland at the end of year, where he appeared in 7 games. His tremendous season with the River Cats earned him the 2000 Pacific Coast League MVP and launched him up the prospect rankings.

Before the 2001 season, Baseball America ranked him as the 34th best prospect in all of baseball and the A's expected him to be the starting second baseman to begin the season. Ortiz appeared to have done enough out of camp to be the A's Opening Day second baseman. Sadly, after 11 games he was sent down after hitting .179. He was then brought back up in May, but he just didn't find enough success. And instead of being patient with Ortiz, the A's instead saw an opportunity with their current club and used Ortiz in a package to land Jermaine Dye and give Jason Giambi some protection.

It was a three-team deal involving the Colorado Rockies and Kansas City Royals, with Ortiz landing in Colorado. He'd get an opportunity to play every day in Colorado and in 53 games, Ortiz would hit 13 home runs and bring in a slash line of .255/.314/.495 and it seemed as though the elevation of Coors Field was what Ortiz needed to succeed.

In 2002, Jose Ortiz saw a nose dive in his Major League future as his power dried up completely, in 65 games, Ortiz hit only one home run and that saw him getting a demotion to Colorado Springs. On September 25th, 2002 at the age of 25, the Dominican native played his last game in the Majors.

For 2003, Ortiz took his talents to the Far East and the Orix BlueWave gave him a chance to rebuild  his career. In his first season, he did just that as he found the power that was last seen in Sacramento, hitting 33 home runs for Orix and ending the 2003 season with a slash line of .255/.311/.536. He even hit for the cycle against the Lions early on in the season.

In 2004, Ortiz saw an even better year in terms of OPS, but a drop in power as he ended 2004 with 24 home runs. In 2005, Orix merged and rebranded with the Kinetsu Buffaloes and the team did not offer Ortiz a contract.

In 2009, the Marines didn't bring back Ortiz and once again, he started the year in Saltillo. And after 17 games, the Fukuoka SoftBank Hawks came calling. In three seasons with the Hawks, Ortiz hit 20 home runs in 2009 and 24 in 2010. His numbers declined in 2011, but in that year, the Hawks would win a Japan Series, which must've felt very good for Ortiz after the Hawks lost at the same stage the year before.

After 2011, the Hawks decided not retain Ortiz and he went back to Mexico to play for 28 games in Saltillo and 17 games in Montclava. And once again, Japan came calling, this time it was our Seibu Lions who offered him. And at the age of 35, Ortiz took over the first base duties in the middle of the year and despite dwindling power numbers, Ortiz delivered a slash line of .286/.336/.462. Along with our old friend Hiroyuki Nakajima and Takeya "Okawari-kun" Nakamura, the Lions found themselves in stage one of the Pacific League Climax Series after finishing 2nd in the Pacific League with a 72-63-9 record.

As a result, a 3 game series against Ortiz's former team, the SoftBank Hawks was their prize. And after the Hawks narrowly beat Kazuhisa Makita in game one, Takayuki Kishi dominated in game two to force a deciding Game 3. In that game, the only two home runs were hit by the Lions, but the they still lost. Okawari-kun hit the first one and in the bottom of the 9th, with the Hawks ahead 3-1, an old friend of the A's, Hideki Okajima looked to close things out for the Hawks. Ortiz stepped up and hit one out to give the Lions some hope, but then they'd fall short in a really tough series that they still haven't really recovered from.

That game would end up being Hiroyuki Nakajima's last one for the Lions and he'd try his hand in the USA to end up struggling in the minor leagues. The Lions brought Ortiz back for 2013 and the wheels really fell off as he struggled for playing time. He retired when 2013 concluded at the age of 36.

In many ways, this is a cool success story, just because the perception is finding success in MLB only. Jose Ortiz seemed to play quite well in leagues that were breaking ball first leagues like the Mexican League and NPB. If you watch the video that shows all of Ortiz's home runs with the Lions, you'll see that Ortiz hits mostly hanging breaking balls out of the yard.

In total, Jose Ortiz hit 135 NPB home runs and gave him a solid career in Japan.

Here are some videos that highlight Ortiz's time with the Lions. If anyone's wondering, his walk-up song was "Las Avispas" by Juan Luis Guerra, a Dominican artist who does songs with merengue beats, and by the way, the Meringue has to be one of the hardest dances I've tried to learn.

The first video shows all of his home runs with the Lions:

This second shows his Ōendan song:


And the third is a live version of his home run in the first stage of the 2012 Climax Series.

Other players from this series: