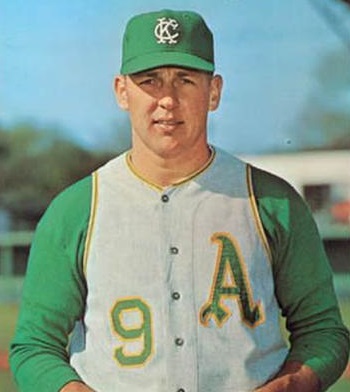 The next player in our series was viewed as the "Next Mickey Mantle," but it didn't work out that way.

A Bellingham, Washington kid, through and through, Roger Repoz looked the part and brought all the hype. Playing for his hometown school of Western Washington University, he put a small school on the map and MLB scouts paid attention. Back in the days before the Amateur Draft, like everyone, Roger Repoz signed a $6,000 bonus with the New York Yankees, that amount of money was the limit for any amateur player, that was until the very next year when that limit became $200,000.

Yankees scouts, media and fans were mesmerized by the look of the 6'3", 190 pound left handed outfielder. His blonde crew cut made him look like Mickey Mantle and it was thought he could do it all. Dick Young of the New York News quoted the Yankees third baseman Clete Boyer the following, "He really has quick wrists, the quickest I've seen. When he finds out what he can do with it, watch out." speaking on Repoz's potential. The Yankees scouts saw him as the heir apparent to Roger Maris rather than Mantle, but the "second Mantle" was just something that the fans couldn't take out of their minds.

Repoz was only supposed to have one real weakness, and that was that he struck out too much. Which Dick Young comments with "That's like saying a guy has a perfect body, except he has a heart condition." and that's a bit harsh. That certainly speaks to the attitudes about baseball in the time of the 1960s.

After doing plenty of damage in the minors with his power, and the Yankees seeing Maris and Mantle wearing down with injuries, Repoz made his MLB debut in 1964 for Yogi Berra's Yankees. That Yankee team would go to the World Series that year, and lose to the St. Louis Cardinals in 7 games. During his time in the Bronx, Repoz really never got a chance to play extensively with Maris and Mantle still manning the Yankees outfield.

Repoz enjoyed Yankee Stadium's dimensions that allowed him to show decent home run totals in part time duty, but he struggled against left handed pitching and was too enthralled with that short porch in right field. His time as a Yankee ended in 1966, when he was traded to the Kansas City A's for Fred Talbot and Billy Bryan. The trade was a nothing for nothing trade, and that was probably relief for the Kansas City A's who constantly got smoked on trades with the Yankees (most notably: Roger Maris for Don Larsen in 1959).

There's not much to say about Repoz's time in Kansas City, he was the last player to wear No. 9 before Reggie Jackson, who became the reason why the number is retired by the A's organization.

Repoz loved playing in New York and he admitted that he wished the trade had never happened. And who could blame him, playing for the Kansas City A's was never a fun time. At that point, the A's were a young team that was on the rise and Alvin Dark was hoping that he could get Repoz to reach the potential that he once had. With Reggie Jackson being called up to Kansas City in 1967, he'd last one and a half years in Kansas City before being traded to the California Angels for Jack Sanford and Jackie Warner in another nothing for nothing trade.

Repoz would have this to say about the now late A's manager Alvin Dark, "Dark was a good manager, (but) a strange man."

Repoz's best years in the big leagues would come in Orange County, he'd establish himself as a decent part time player who was a real three true outcomes hitter. In fact, during his MLB career, Repoz would have 13 Adam Dunn hat tricks (games in which a batter hits a home run, draws a walk, and strikes out all in the same game). It's a remarkable accomplishment for someone who only had 82 career home runs.

In fact, that wouldn't be the only interesting tidbit from his big league career. In 1971, Roger Repoz would become the first player to have a batting average below .200 and an OPS above .700. Even more impressively, Repoz would go three seasons without grounding into a single double play. All in all, it was between 1,018 plate appearances without a GIDP.

With nowhere to go, Repoz looked to Japan for a rebirth in his stifled career. The Taiheiyo Club Lions from Fukuoka were the ones who came calling. They signed him for $124,000 which nearly doubled his annual salary during his career in the big leagues. Repoz had admitted that things weren't easy in Japan, since most guys couldn't take the Japanese way of baseball, but he also said, "They paid for everything; I had an apartment year round; the lifestyle was good; they treated you like a star."

Large expectations were placed on Repoz from the Lions fans, but he had subpar year with the team which saw his days with the club end after 1973. In 66 games with the Lions, he hit .220 with 12 home runs for his lone season in Fukuoka.

The Yakult Swallows were the ones who took a chance on him the year after, and they were rewarded for doing so. 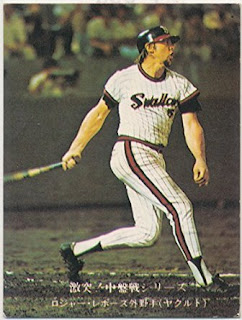 He'd deliver home run totals of 25, 27, 36, and 22 as Repoz took advantage of the band box that is Jingu Stadium. Repoz thought Jingu was like playing in a sandlot since it was an all sand infield at the time, but that didn't bother his performance. In 1975, he was the only foreign player in the Central League's Best IX (Nine).

Repoz's career ended after the 1977 season and he was out of baseball at the age of 36. A failed prospect in every way, Repoz was able to have a decent career in Japan hitting 122 career home runs there.

Repoz played during two fruitless time periods for the A's and Lions. He's the last guy in this series with that unfortunate misery.

Special thanks to SABR.org and baseball-reference for all the information. I couldn't find any pictures of Repoz from his Lions days, if anyone has any, please share them.


Others in the series: