The Fukuoka Softbank (ソフトバンク) Hawks were originally owned by Nankai electric railways in 1938. Their most famous title was as Nankai Hawks from 1947-1988 and they were based in Osaka before their move to Fukuoka. When moving to Fukuoka, their ownership changed and they were called the Fukuoka Daiei Hawks from 1989-2004. Daiei is a famous supermarket chain in Japan. The Hawks were then-sold to Softbank to become the Fukuoka Softbank Hawks, a title they've held since 2005.

Softbank is not a bank, but a telecommunications company that also specializes in e-commerce, media, technology internet services, phone services and more. The title of "Softbank" is more a reference to a bank of software and technology, hoping to continue to develop electronics in the future.

They are in partnerships with Yahoo!, E-trade, Ustream and other companies. Softbank also gives their employees jerseys of the Hawks and they can wear them at work in Japan. (Sorry, they don't do the same for USA employees, per source, but they are aware of the baseball team).


The Hawks have a very good structure in stashing talent, but also keeping their players long term with a better payday. Their budget has not been a problem with several free agents also coming to Fukuoka. This number should stay at the top, but they don't build their team with just free agency. 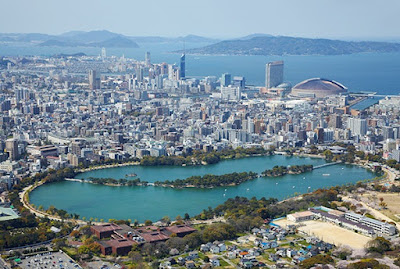 Fukuoka is the northern part of Kyushu Island, which is the southern portion of Japan. With Fukuoka being closer to the equator than the rest of the big cities that have NPB teams, the climate is tropical and more humid. There are several festivals and other cultural things in Fukuoka. In terms of food, Hakata (Tonkatsu) Ramen is a specialty of the area.

It's a short flight away from South Korea, which makes it an easy getaway spot. For those who've played Pokémon, Generation III  of Ruby, Sapphire and Emerald representing the Hoenn region is based out of Kyushu, where more surfing and water is featured.

The Fukuoka Yafuoku! Dome (Yahoo! Auction Dome) is the only retractable roof stadium in NPB. However, the Hawks don't play outdoors too often in a given season with complaints about noise from the neighboring areas combined with the cost to open and close the roof. Here's a photo of how it looks when the roof is open. 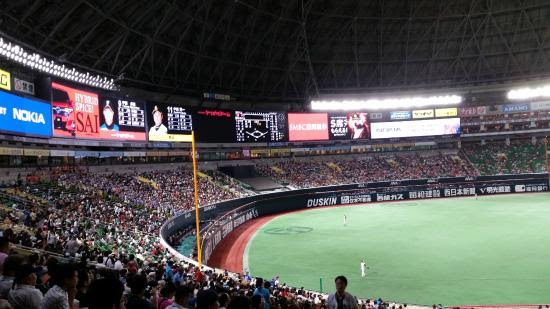 One of the biggest thing to note about this dome is how they added a closer fence in 2015, where it's also shorter than the previous dimensions. Private seats were including in both left and right field with centerfield represented by a line, which is shorter than before. The home run total doubled last year with the Hawks allowing and hitting more than their track record shows.

Primary Uniforms: Made by Majestic for 2016

Notice that Softbank puts their "=" logo on the cap and on the sleeves, if not the pants stripes.  You can read more about it here. \
If we want to be technical, there's a family of Hawk mascots, where you can see a photo of them here.


This song was used when they were Fukuoka Daiei Hawks, but the lyrics obviously changed to Softbank when ownership changed in 2005. A retro version can be heard here.

Note: You'll either really like or really be annoyed by their style of chanting. Some tunes are repetitive and redundant, while others can be slow/dull. Even their general theme after a base hit or a basic out feels like it's on a loop just to rub it in on the opponent.  There are also "dance motions" while holding the plastic bats/megaphones.

The Hawks are homegrown, but always contenders. Not only are they built for the present, but the future as well with plenty of talent stocked up. They have a second team, but they build up talent even for a third team, working from within. It helps when they have a high payroll to spend on free agents like Lee Dae-Ho and Dennis Sarfate.

At the time of this writing, Softbank has 17 Pacific League pennants and has won a Japan series in three of the last five years (2011, 2014 and 2015). They should be good for both the now and long term.

As Nankai Hawks: Don Blasingame (as both a player and later manager, Don Buford, Carlos May

Notable Hawks who played in MLB:

Why you root for them: The question is, why don't you root for them? They're consistently a contending team and they should have more Japan Series titles from their dominance in the 1950s and 1960s, but ran into the Yomiuri Giants where they would only have a handful. The Hawks should be a winning team in the Pacific League with great talent at both pitching and hitting. Their ballpark even helps with a shorter fence, making it a bandbox, but dangerous no matter what because the power numbers of their lineup goes up.

Rather than be loyal to a big city in Tokyo or Osaka, Fukuoka is the sixth largest in Japan and brings a different taste of the country to light. Best yet, their fans shows up on a nightly basis and are always loud inside the dome. Lucky 7 is always packed and everyone buys a balloon for the break and song.

Why you don't root for them:  You would dislike having high expectations every year with the fear of coming up short. The Hawks primary weakness has been stranding runners on base for numerous years. When Sadaharu Oh was the manager, the team found creative ways to exit in the postseason. Oh is currently the chairman of the Hawks.

Tickets would be expensive and corporate priced compared to other teams. Maybe it's also too easy to be a fan of them, because they've been contenders every year. Not much reward compared to liking a team that has struggled more times than not.