The Hanshin (阪神) Tigers have been around since 1935, being the other primary team in Japan besides the Yomiuri Giants. They had stints of being called the "Osaka Tigers" before being named Hanshin Tigers in 1961 and sticking with that title ever since.

Hanshin is part of a bigger conglomerate known as Hankyu Hanshin holdings, but the title of Hanshin (阪神) is very direct in relation to the cities of Osaka and Kobe, taking part of their Kanji and merging the two. While some words have homophones and homonyms, 阪神 can also read as Hanshin.

In this case, Hanshin Electric Railway is the train company that has a railway connecting both cities in the Kansai region.  Their cap logo's "T" has a hammer, in reference to the railroad.

The Tigers are a big market team and they have a higher budget than the rest. This isn't too surprising and they could be as high as third next season.

The Tigers are Osaka's team, in contrast with the Orix Buffaloes as they're older and in the Central League. The Kansai region even extends to Kyoto, which is a historic area of the country. As earlier said, Osaka has its own identity in comparison to Tokyo, where there is a culture shock.

In Osaka, you can find plenty of street food which has several treats including takoyaki, okonomiyaki, udon and more. It's the second juggernaut region behind Greater Tokyo. 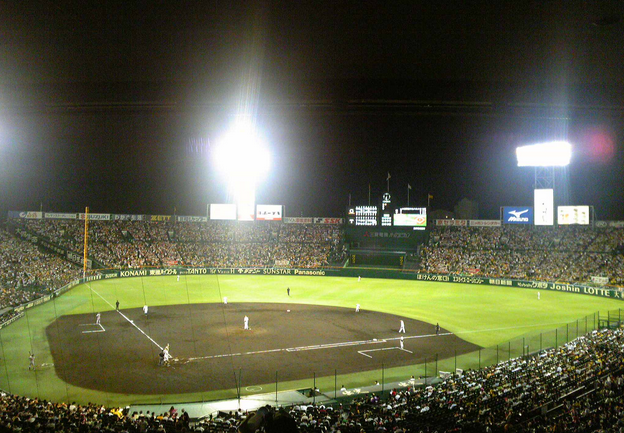 Koshien Stadium is the most historic of all NPB ballparks. It's the largest stadium in terms of seat capacity as well.

Besides the Hanshin Tigers, it's also home to the Koshien tournament, which is a major high school baseball tournament that involves the entire country. The infield dirt is considered to be sacred and visible on purpose, with the exception of when (American) football games take over the building for the Koshien Bowl in the offseason. There is also a baseball hall of fame dedicated to the amateur level of the sport in Japan inside Koshien.

Koshien was home to several exhibitions when MLB players would take a tour of Japan. There is a plaque commemorating Babe Ruth setting foot in this building from the 1930s.

With a Koshien tournament happening in both the spring and summer (the latter being more important), the Hanshin Tigers occupy the Kyocera Dome, home of the Orix Buffaloes during both events in March and April as well as August.

Primary Uniforms: Made by Mizuno.

Mascots: Torakkii (left) and Rakkii (right) which can be interpreted as To Lucky and Lucky. Torakki's name is a play on the Japanese words for tiger ("tora") and lucky ("rakkii"). This is the Hanshin Tigers victory song after a win. I found a 1980s version, not the current as it was copyrighted. It isn't what you'll hear during Lucky 7 in Koshien, but it is used on the road.

In Koshien Stadium, a short instrumental melody plays before balloons are released.

This is an incomplete list of songs from 2015, as I couldn't find a full medley.


Here is a chance song they use when playing in Tokyo Dome.


This is the full lineup in electronic instrumental form, not as nice as it is live.  You might notice, they sing a song to the tune of Auld Lang Syne.

The Tigers used to be called the "Red Sox" of Japan due to their rivalry with the Yomiuri Giants, who are the New York Yankees of Japan. However, with the Red Sox winning three World Series Championships since 2004, we'd prefer to call them the Cubs.

They're in a huge market representing the whole Kansai region, but have only won one Japan Series championship from 1985. When they won their only title, there is a "Curse" story with how the fans celebrated. While we can't explain it all here, you can read it on your own.

Cubs fans are known to be psycho and their passion can lead to the wrong direction. Many Hanshin Tigers fans share this same pain, knowing they haven't won a championship in a long time, but a minority can be a little too violent. Tigers fans travel extremely well, no matter what their record is, which is how the Cubs have been through the good and bad. The Cubs won a World Series in 2016, but they relate closer to the Tigers thanks to them being in a league where the pitcher bats.

The Kyojin-Tigers rivalry is the only one in NPB which gets the national attention. Nothing else matches it.

Notable MiLB and MLB Players who played for the Tigers:

Ryan Vogelsong, Cecil Fielder, Kei Igawa, Keiichi Yabu, Tsuyoshi Shinjo
Note: Igawa is the only player who has been posted by the Tigers, remembered in the New York Yankees organization.
===

Because these fans are passionate. There's no denying they show up for games no matter how good or bad the team is. Their fans are everywhere at home or away. Your team would play in the most iconic stadium in the country known for its history, appearance and size. Or in some cases, you just want to be different and not side with a Tokyo-based team.

Because the Tigers are "cursed" with their significant Japan Series championship drought. They've been in the Japan Series three times since winning it last time in 1985. Some fans are known to be crazy for the wrong reasons as they are popular, meaning there could be some rotten apples in the bunch.

The Tigers organization has also handled things incorrectly with foreign players used as a "fall guy" in the past. An example was when Randy Messenger was sent down to the farm team, but Messenger himself was the last person to know the news. Everyone from the media and his family knew what would happen before he was informed. There was also tension with Murton, who could have also been the fall guy for their struggles if they were losing.

There has also been a sign of arrogance, where they were thought to be contenders in 2015 by themselves based on their run in the 2014 postseason. However, the Tigers were exposed in 2015 as a mediocre bunch after having issues with hitting and a shaky bullpen.