The Tōhoku Rakuten (楽天) Golden Eagles were formed in 2005 after the Orix BlueWave and Kintetsu Buffaloes merged into Orix Buffaloes at the end of 2004. A new location would have its own baseball team as a result.

Rakuten (pronounced Rock-U-Tin) is an E-Commerce company who can help in banking, brokering, travel and more. It's also one of the most useful internet shopping websites in Japan, where it can ship internationally. Rakuten.com can be the Japanese equivalent of Amazon for buying goods. They also sell plenty of NPB merchandise for those who want it.

Livedoor came in second place as the potential owners of the new baseball team in Sendai and their title would've been the Livedoor Phoenix.


One should note that about ¥500 million ($4.1 million) separated the 5th highest payroll from the last. This number could go up, with the recent foreign signings they made. 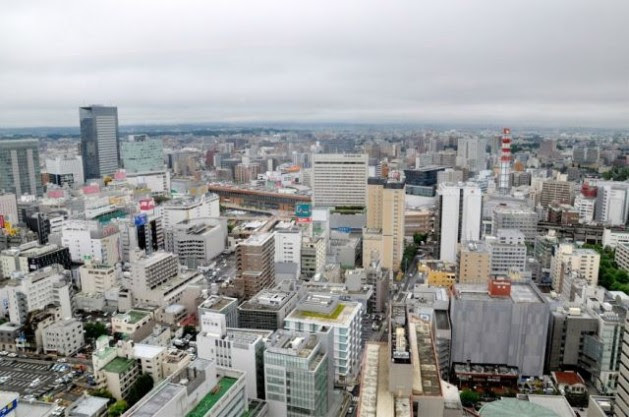 Sendai was the largest city affected by the 2011 Tsunami Earthquake. It's the biggest city in the entire Tōhoku region, which is the northern part of the Honshu island. Tōhoku (東北) actually translates into "Northeast". While the Tsunami happened nearly five years ago, people in the area are still affected today without a home and the disaster resonates every March 11.

Hot springs are also a big deal in Tōhoku, if not the more basics food in the North. It's a very earthy part of the country and they even promote being green in their alternate uniforms. 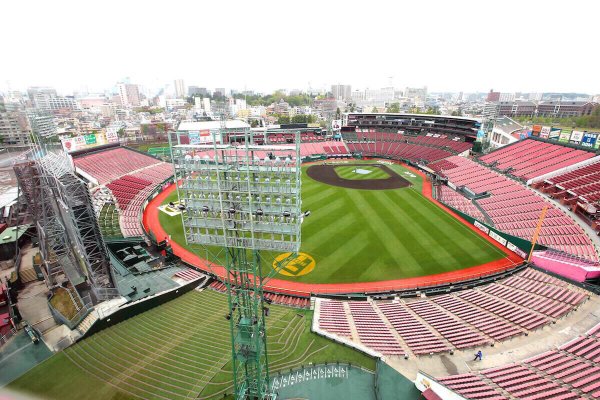 Kobo Stadium is one of only two primary outdoor ballparks in the Pacific League. It used to have the title of "Kleenex Stadium" at one point. The dimensions are symmetric and the field features grass with a normal infield dirt.  Not only this, but they even installed a Ferris Wheel in LF and the photo above shows a view from the top. 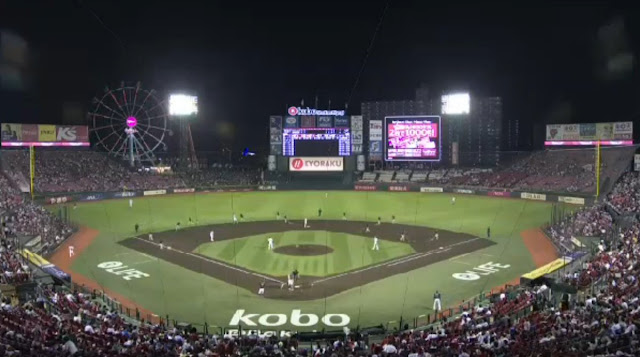 Traditionally, this is a pitcher's ballpark. This stadium was once a home to the Lotte Orions, the former name of the Chiba Lotte Marines.

This building was damaged by the 2011 Tsunami Earthquake, forcing the Eagles to play away from their home temporarily.

Primary Uniforms: Made by Majestic 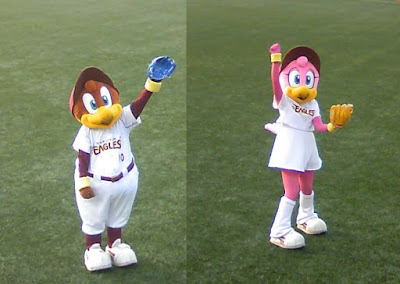 The Golden Eagles are named after a species of eagles that live in the Tōhoku mountains.

Rakuten is a young expansion team like the Dbacks and they won a championship in their first decade of existence. After going through growing pains as a new franchise, the 2013 season proved to be the magical one where they won the Japan Series in their ninth season.

Notable MiLB and MLB Players to play for Rakuten:

Notable Eagles to play in MLB:

Note: Iwakuma had an interesting case, where he refused to play for the merged Orix Buffaloes, so he was traded to Rakuten as a result.
===

Because they're a young team who brings a different energy to baseball. The Tōhoku region is simple in its own way and you can relate to this, rather than being corporate like Tokyo. It's remote and far from the larger markets, but it's a simplistic side of Japan. Also, you could be a fan of Tanaka and wondering where he dominated before playing with the New York Yankees in MLB. He went 24-0 in his final season with Rakuten before they won their first championship in 2013.

Rakuten has also worked to provide more service in English besides buying products off their website. There's an exclusive English radio featuring several teachers in the area providing commentary on each home game for the Eagles. You can download the Rakuten.FM App for Android or iPhone as well as listen through a PC here. If you have twitter, you can talk to the commentators through the hashtag #EagleStation.

There is a lack of tradition or history due to being an expansion team. Through 11 seasons in team history, they've only been to the postseason twice, which means less winning.